The Pharisees and some of the teachers of the law who had come from Jerusalem gathered around Jesus and saw some of his disciples eating food with hands that were defiled, that is, unwashed. (The Pharisees and all the Jews do not eat unless they give their hands a ceremonial washing, holding to the tradition of the elders. When they come from the marketplace they do not eat unless they wash. And they observe many other traditions, such as the washing of cups, pitchers and kettles.)

So the Pharisees and teachers of the law asked Jesus, “Why don’t your disciples live according to the tradition of the elders instead of eating their food with defiled hands?”

He replied, “Isaiah was right when he prophesied about you hypocrites; as it is written:

“‘These people honor me with their lips,

but their hearts are far from me.

They worship me in vain;

their teachings are merely human rules.’

You have let go of the commands of God and are holding on to human traditions.”

And he continued, “You have a fine way of setting aside the commands of God in order to observe your own traditions! For Moses said, ‘Honor your father and mother,’ and, ‘Anyone who curses their father or mother is to be put to death.’ But you say that if anyone declares that what might have been used to help their father or mother is Corban (that is, devoted to God)— then you no longer let them do anything for their father or mother. Thus you nullify the word of God by your tradition that you have handed down. And you do many things like that.”

Again Jesus called the crowd to him and said, “Listen to me, everyone, and understand this. Nothing outside a person can defile them by going into them. Rather, it is what comes out of a person that defiles them.” 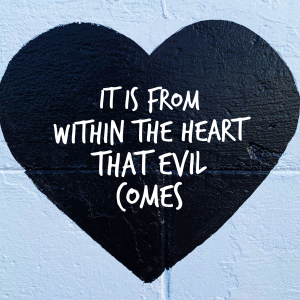 After he had left the crowd and entered the house, his disciples asked him about this parable. “Are you so dull?” he asked. “Don’t you see that nothing that enters a person from the outside can defile them? For it doesn’t go into their heart but into their stomach, and then out of the body.” (In saying this, Jesus declared all foods clean.)

He went on: “What comes out of a person is what defiles them. For it is from within, out of a person’s heart, that evil thoughts come—sexual immorality, theft, murder, adultery, greed, malice, deceit, lewdness, envy, slander, arrogance and folly. All these evils come from inside and defile a person.”

One of my clergy friends told me about a children’s sermon she recently preached. She told the children about how Jesus wants our hearts. One kid responded, as truly only a child can, with sheer horror. The child’s response was something like, “But I don’t want Jesus to take my heart! I need it to live!” She proceeded to explain that what she meant was that Jesus wants to live in our hearts. A comical moment, no doubt. I can imagine the chuckles of the congregation. But when I think about the child’s response of fear, thinking that Jesus wanted to literally take his heart out of his body, (a la Indiana Jones and the Temple of Doom), I can’t help but think, maybe that response isn’t as far out there as we think. See, Jesus is actually concerned about our hearts – and what lives within them. And the work that Jesus wants to do with our hearts can be downright painful and scary.

In the text this week, Jesus and the Pharisees hash it out over what it means to be “pure.” The Pharisees become quite concerned when they see that some of Jesus’ disciples are not observing the practice of ceremonial handwashing before eating. To us, this might seem like it’s not a very big deal, but it was significant to the Pharisees. It was an important way that they showed their commitment to recognizing the blessings of God. The practice of ceremonial washing before eating was a traditional way that many Jews showed honor to God. It was an act they took seriously, even if it wasn’t technically Law, per se.

When that group of Pharisees see some of Jesus’ disciples failing to conform to this practice, to them, it felt like an affront to God, and they wanted to prove that Jesus was, in fact, a heretical teacher. Jesus’ response, however, is pure gold. The Pharisees are trying to indict Jesus by accusing him of circumventing the Law; Jesus’ response holds the mirror right up to the Pharisees to show them their hypocrisy in idolizing their own traditions to the point that they are actually the ones violating the Law! (This is what is going on in the whole conversation where Jesus quotes Isaiah and then talks about honoring one’s mother and father and the use of Corban, which was a practice of giving one’s assets to the Temple, assets that may no longer be used for the family’s, including elderly parents’, care).

Jesus continues on and moves the conversation to address the heart of the matter (pun intended). He shifts the conversation from outward practices and traditions to the content of the heart. He says, what actually defiles a person is what comes from within the heart. In other words, we can do or say all of the right things, but when we have hatred, or malice, or selfish desires in our heart, we, in fact, violate the Law. We might have all of the “right traditions, go through the “right motions” in worship, or even keep the letter of the Law, but those things are not what make us good or righteous. Jesus talks extensively about this very idea in his Sermon on the Mount.

(Please do note that in Jesus’ condemnation of the Pharisees that he is not making a blanket condemnation of all tradition or outward acts of piety. Rather, he is condemning the ones that circumvent the heart of the Law and become idols in themselves. Sometimes traditions can teach and train our hearts in the ways of Jesus.)

What is in our hearts matters. We might be very practiced at saying and doing all of the right things, but if, in our hearts, as Christians, we are filled with selfishness or hatred or lust for power, then we are no different from the Pharisees in today’s text. This is not to say that our actions don’t matter. They do. And in fact, goodness, kindness, love, and the other fruits of the Spirit are things that should flow out of a heart that is being changed. Jesus does want out hearts, but he wants them so that our whole lives and world can be truly transformed.

Jesus holds up a mirror to each of us. What do you see today?

o   What words, phrases, or images from the text speak to you? What thoughts or feelings do they evoke?
o   What do you see in the mirror?
o   What traditions do you hold on to? What traditions have helped cultivate your heart in positive ways? What traditions might you need to leave behind for the sake of the gospel?

Get a mirror. Look into it. Have a conversation with yourself about what you see – not physically, but spiritually. What might God be wanting to do in your heart today?

Think about someone (whether it is an individual, or perhaps even a group of people) to whom your heart has been hardened. Simply spend some time in prayer for that person or group of people – not prayers that they might change, but that God might meet their every need.

God, you want to work in my heart. I give it over to you, to tend it, to prune it, to plant new seeds within it. Tear out the weeds of selfishness and fear and hatred. Make me new. In Jesus’ name, I pray. Amen.