Rehoboam went to Shechem, for all Israel had gone there to make him king. When Jeroboam son of Nebat heard this (he was still in Egypt, where he had fled from King Solomon), he returned from Egypt. So they sent for Jeroboam, and he and the whole assembly of Israel went to Rehoboam and said to him: “Your father put a heavy yoke on us, but now lighten the harsh labor and the heavy yoke he put on us, and we will serve you.”

Rehoboam answered, “Go away for three days and then come back to me.” So the people went away.

Then King Rehoboam consulted the elders who had served his father Solomon during his lifetime. “How would you advise me to answer these people?” he asked.

They replied, “If today you will be a servant to these people and serve them and give them a favorable answer, they will always be your servants.”

But Rehoboam rejected the advice the elders gave him and consulted the young men who had grown up with him and were serving him. He asked them, “What is your advice? How should we answer these people who say to me, ‘Lighten the yoke your father put on us’?”

The young men who had grown up with him replied, “These people have said to you, ‘Your father put a heavy yoke on us, but make our yoke lighter.’ Now tell them, ‘My little finger is thicker than my father’s waist. My father laid on you a heavy yoke; I will make it even heavier. My father scourged you with whips; I will scourge you with scorpions.’” 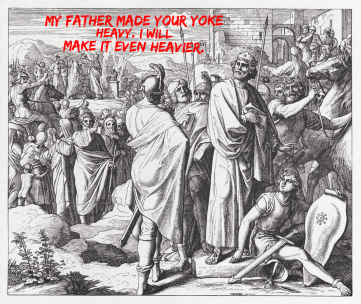 Three days later Jeroboam and all the people returned to Rehoboam, as the king had said, “Come back to me in three days.” The king answered the people harshly. Rejecting the advice given him by the elders, he followed the advice of the young men and said, “My father made your yoke heavy; I will make it even heavier. My father scourged you with whips; I will scourge you with scorpions.” So the king did not listen to the people, for this turn of events was from the Lord, to fulfill the word the Lord had spoken to Jeroboam son of Nebat through Ahijah the Shilonite.

When all Israel saw that the king refused to listen to them, they answered the king:

“What share do we have in David,
what part in Jesse’s son?
To your tents, Israel!
Look after your own house, David!”

Then Jeroboam fortified Shechem in the hill country of Ephraim and lived there. From there he went out and built up Peniel.

Jeroboam thought to himself, “The kingdom will now likely revert to the house of David. If these people go up to offer sacrifices at the temple of the Lord in Jerusalem, they will again give their allegiance to their lord, Rehoboam king of Judah. They will kill me and return to King Rehoboam.”

After seeking advice, the king made two golden calves. He said to the people, “It is too much for you to go up to Jerusalem. Here are your gods, Israel, who brought you up out of Egypt.” One he set up in Bethel, and the other in Dan.

I was a big fan of the show Game of Thrones while it had its run on HBO. I love the genre of fantasy, and if you throw in some dragons, I am definitely a fan. I had been a fan of the book series long before it became a TV show as well. What made me such a fan of the books and the show, however, was not that it was just another epic fantasy series – what made me a fan was the character development and its nitty-gritty realpolitik. The series did not shy away from playing out the often-horrifying consequences of a Machiavellian politics – a politics not based upon any kind of moral ideal or social good, but based upon pragmatically amassing and asserting power.

Today’s text reads a little bit like a scene from Game of Thrones. In it, we see how the divided monarchy arose, barely one generation after King David. For a brief recap of what happens prior to this passage: when David dies, his son, Solomon, becomes the king. Solomon continued to amass and consolidate power through political alliances (often contracted through marriage – Solomon had hundreds of wives and concubines), through trade, and through major construction projects, including the Temple. Solomon was simultaneously seen as being both wise, but also as a one who was easily swayed and distracted by foreign gods.

When King Solomon dies, his son, Rehoboam succeeds him. Rehoboam, who has grown up wealthy and in a place of power, now wants to assert his power in his own right. The seeds of discontent have long been sowing in Solomon’s kingdom, and now they are brought to fruition. Jeroboam, who had previously served Solomon, but had deserted him and fled to Egypt, harboring a desire to become king over the ten northern kingdoms of Israel, at least in part because he saw Solomon’s sin of abandoning God to worship foreign gods. Once Solomon is dead, Jeroboam returns from Egypt to confront Rehoboam. Jeroboam gives Rehoboam a chance – if he will lighten the yoke placed upon the ten northern tribes of Israel, they will not rebel and they will serve Rehoboam.

Rehoboam sends Jeroboam away so he can consult with the elders from his father’s day. They advise him to lighten the yoke for the sake of peace in the kingdom. But Rehoboam is not satisfied with this advice. So instead, he consults his friends, who advise him not only to not lighten the yoke, but to make it heavier – to assert his dominance – to show them who’s boss. So this is what Rehoboam foolishly does.

And with that, the final nail is hammered into the coffin of the united monarchy. Jeroboam heads north where he is crowned as king of the ten northern tribes of Israel, while Rehoboam remains king over only the two southern tribes. Never again will the twelve tribes be united. Rehoboam continues to control Jerusalem and worship in the Temple, while Jeroboam sets up two sites for worship up north so those who belong to the northern kingdom do not have to travel down to Jerusalem to worship, thereby avoiding the temptation to worship the foreign gods that Solomon under his laxity had allowed to become a part of society.

Phew. Quite the history lesson, but perhaps also a theology lesson. Remember, that just a few generations prior to this moment, Israel had not had a king. It was not God’s desire that Israel have one. And yet, Israel demanded that God give them a king to be like the other nations. God warned them that it would not be good for them. They demanded anyway. What we see just a few short generations later is what happens when a people put their trust and hope in an earthly ruler. We see what happens to those who are put in positions of worldly power. It becomes a big old mess – full of corruption, entitlement, and power games.

o   What words, phrases, or images from the text speak to you? What thoughts or feelings do they evoke?
o   How does this story speak to you today? What warnings or challenges might you take away from this text?
o   Who do you know who currently suffers under a heavy yoke?

We are in the thick of gearing up for election season in our country. We probably each have a political party or stance that we tend to default to. It can be incredibly difficult to see the bigger picture or to see the way faith calls us beyond political party or candidate. Take some time today to pray, asking God to show you a third way of being in the world, apart from our embedded two-party system.

Jeroboam asks Rehoboam to lighten the yoke of the people. Consider someone you know who would be considered to be living on the margins in our society – someone living below the poverty line, an immigrant, a person of color, a child who is currently in the foster system, etc. What can you do to lighten their load? Is there a task you can help them accomplish? Is there legislation you can lobby for? Do they have a story you can amplify?

Lord Jesus Christ, I know that you are the one true King. You are the one true Savior. Help me to put my trust in you, and not in any other systems or powers or rulers. Help me to see those who suffer under a heavy yoke, and to take action to lighten that yoke as a builder of your kingdom. In Jesus’ name I pray. Amen.